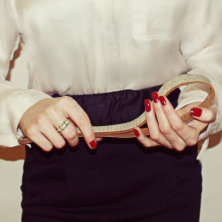 After a lifetime of being a Dom & only switching a handful of times I am now embarking on an experiment. I have found a lady whom I met in order to spank. The session felt awkward, conversation & her response to my initial spanking silent. We talked. Something about her held me in thrall. A striking beautiful woman. She was usually a Dominatrix … I new it! I had seen it in her eyes but failed to express it. I took her back somewhat when I expressed an interest in being spanked by her there and then. By the end I knew I had met a Domme who I could offer myself to in total submission.

It’s not the end of my spanking of the female rear but the start of an exciting experiment in which I will throw myself open and be subjugated, spanked, beaten, and pegged … among other things by a Woman that I will truly serve. My first meeting is soon and will start with an intense hand spanking on her lap. Few other things occupy my mind at present!!